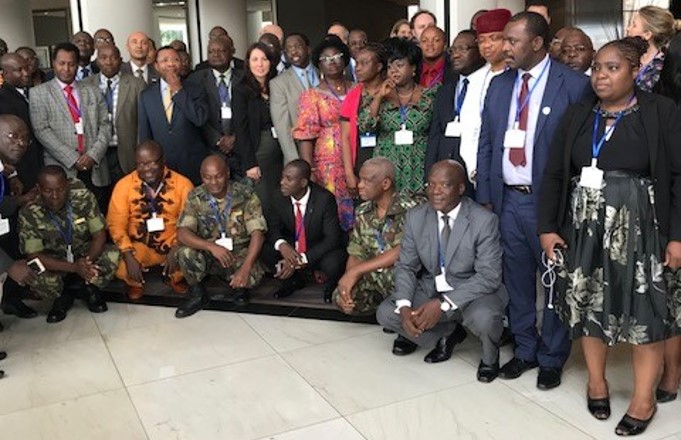 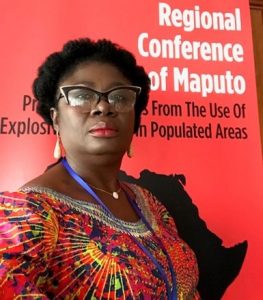 THE REGIONAL MEETING ON PROTECTING CIVILIANS FROM THE USE OF EXPLOSIVE WEAPONS IN POPULATED AREAS HELD AT THE HOTEL AVENIDA, MAPUTO, MOZAMBIQUE FROM 27TH-28TH NOVEMBER 2017

The meeting began with an opening by Mr. Jean-Baptiste Richardier- Founder of Handicap international calling from governments to support the political declaration to stop the use of explosive weapons in populated areas.
The Minister of Foreign Affairs of Mozambique H.E. Mr. Oldemiro Julio Marques Baloi declared the meeting open.
Ms Marcia Freitas de Castro-UN Resident Coordinator gave her good will message, followed by the representative of the ICRC Dr Eirini Giorgou and a presentation by Ms Margaret Arach Orech of Ugandan Landmine Survivors Association also made a presentation.

Technical session- day one
Session 1- background on the issue and where we are now
This session provided a brief overview of the humanitarian impacts resulting from the use of explosive weapons in populated areas, and the growing number of actors concerned about this pattern of harm, experienced in a variety of contexts. It also updated the efforts being undertaken to address this issue of grave humanitarian concern, and the current international policy landscape and also layed out objectives for the meeting. Speakers were taken from the International Network on explosive Weapons (INEW); UN Office for the coordination of Humanitarian affairs (OCHA) and the permanent mission of Republic of Mozambique to the UN in Geneva.
There was general discussion and statements from the governments of Norway, Angola, Uganda, Togo, Mali, Senegal, D R Congo and Zambia- all of whom expressed commitment and called on other governments to support for the political declaration and these governments should aim for strong and national policies so as to strengthen compliance

Session 3: The impact of explosive weapons on infrastructure and essential services
This session provided an overview of the wider pattern of harm from the use of explosive weapons in populated areas, with a focus on the damage and destruction to private property including housing, as well as essential infrastructure and critical services such as medical services and healthcare, water and sanitation systems, and education and the resulting impact on the civilian population. Speakers included and spoke on International committee of the Red Cross (ICRC)- ; PAX; and IANSA Women Network Nigeria and spoke on; Destruction of infrastructure and services; impact on healthcare: a look at Ukraine and Libya; Impact on education

Technical session DAY 2-
Session 5: Managing explosive weapons with wide area effects
The session looked at types of explosive weapons that exist and are currently in use. These include aircraft bombs, artillery shells, missile and rocket warheads, mortar bombs, grenades and improvised explosive devices. It looked at in particular at concerns over explosive weapons with wide area effects, and the risks that these present to civilians, as well as efforts better constrain the use of explosive weapons to better protect civilians. Speakers included the Geneva International Centre for Humanitarian Demining (Characteristics and effects of explosive weapons); UN Office for the Coordination OF humanitarian Affairs (OCHA)- Military policy and practice to strengthen the protection of civilians); enhancing the protection of civilians, an example of AMISONs operational policies in Somalia; Handicap International Kenya (working with militaries)

Session 7: working group- what are the practical steps African states and civil Society can take:
Next steps/conclusions:
– Regular training and retraining of military personnel
– Checks and balances in the ministry supervising the 3 arms of Government
– Legislative arm be brought on board and tabled for something tangible to come out of it
– Nigeria will do everything possible to come to terms with this political declaration
– Authorities ensure no direct target and ensure minimum casualties
– Carried to relevant authorities to for an outcome in support of the political declaration

Maputo Regional Meeting on Protecting Civilians from the Use of Explosive Weapons in Populated Areas
Communique
Representatives of 19 African countries, the United Nations Office for the Coordination of Humanitarian Affairs, the International Committee of the Red Cross, the International Network on Explosive Weapons and other civil society organizations, met in Maputo, Mozambique, from 27-28 November 2017, to share knowledge and evidence on the distinctive pattern of harm caused to civilians by the use of explosive weapons in populated areas, and to explore steps to address this harm at a political and operational level.
Representatives have expressed concern that explosive weapons used in populated areas cause deaths, injuries and traumas to civilian victims, damage and destroy essential infrastructure and critical services, drive forced displacement, leave explosive remnants of war that pose a threat in the long term, disrupt socio-economic activities and potentially compromise human security;
In their exchanges, the representatives concluded that the involvement of African States and civil society can play a pivotal role in enhancing the protection of civilians from the harm caused by explosive weapons in a time when armed conflicts are increasingly fought in population centers;
Furthermore, the State representatives acknowledged the need for further actions to address this issue at national, regional and international levels, inter alia:
– Encourage collection of data and information to increase awareness and enhance knowledge about the impact of explosive weapons on civilians in populated areas;
– Avoid the use of explosive weapons with wide area effects in populated areas;
– Fully support the process that will lead to the negotiation and adoption of an international political declaration on the use of explosive weapons in populated areas;
– Promote bilateral and regional cooperation through sharing experiences, good practices and expertise on reducing the harm caused by explosive weapons to civilians;
– Constructively engage in discussions and initiatives at international level that could effectively provide greater protection to civilians in armed conflicts;
– Foster deeper and further engagement from African States and facilitate increased involvement as a group of States;
– Continue and strengthen cooperation and partnerships with international organizations and civil society organizations to draw upon their relevant expertise and support;
– Channel contributions to the draft international political declaration on the matter, as well as engage in advocacy, at national, regional and international levels.
Maputo, Mozambique, 28th November 2017