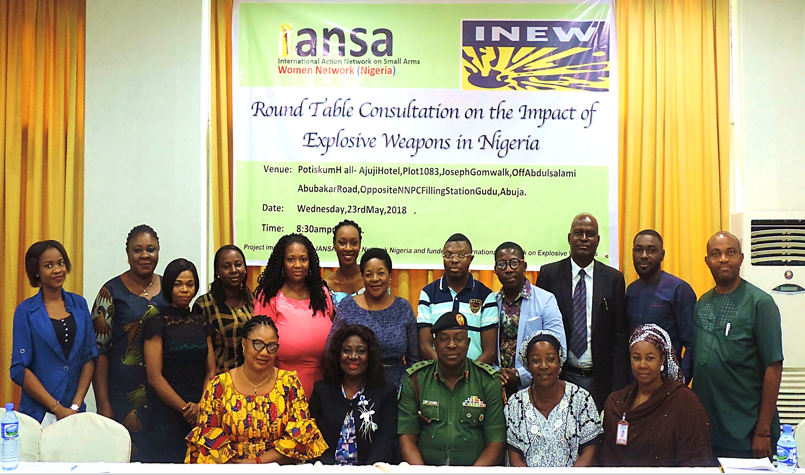 Funded by International Network on Explosive Weapons (INEW) And Implemented By International Action Network On Small Arms (IANSA) Women Network Nigeria On 23th Of May, 2018 In Abuja, Nigeria

AIM
The aim of the round table consultation was to discuss and receive recommendations on resolutions with regards to the use and impact of Explosive Weapons (EW) in Nigeria.

PRESENTATION
The first presentation was on the “Impact of Explosive Weapons in Nigeria”. The facilitator spoke on explosive weapons, how they function and the devastating effects it can have on civilians especially when used in populated areas as well as the military, infrastructure and services. She gave the impact of Explosive Weapons on Education, Gender, the Economy, and its humanitarian impact with the North Eastern part of Nigeria being most affected. In giving the history of the use of explosive weapons in Nigeria, she stated that it started way back in the Nigerian Civil War where ‘Ogbunigwe’ (fondly called ‘Ojukwu Bucket’; a series of weapons systems including missiles, mass-produced/locally built IED by the Republic of Biafra) was used against Nigeria between 1967 and 1970.
The second presenter elucidated on “The Overview of Agreements from the Regional Meeting on Protecting Civilians from the use of Explosive Weapons in Populated Areas”. An extract from the Communiqué at the end of the Regional Meeting held in Maputo, Mozambique on the 27th and 28th of November 2017, having 19 African nations including Nigeria assenting to it. She stated that although it was agreed at the end of the meeting that there was a need to encourage the collection of data and information to increase awareness and enhance knowledge about the impact of explosive weapons on civilians in populated areas; avoid the use of explosive weapons with wide area effects in populated areas; promote bilateral and regional cooperation through sharing experiences, good practices and expertise on reducing the harm caused by explosive weapons to civilians; fully support the process that will lead to the negotiation and adoption of an international political declaration on the use of explosive weapons in populated areas; constructively engage in discussions and initiatives at international level that could effectively provide greater protection to civilians in armed conflicts; foster deeper and further engagement from African States and facilitate increased involvement as a group of States; continue and strengthen cooperation and partnerships with international organizations and civil society organizations to draw upon their relevant expertise and support; and channel contributions to the draft international political declaration on the matter, as well as engage in advocacy, at national, regional and international levels; Nigeria is yet to call for action to address the harm.

PLENARY DISCUSSION AND SUGGESTIONS ON “OVERCOMING THE CHALLENGES OF EXPLOSIVE WEAPONS IN NIGERIA”
This session was chaired by the Network Coordinator of IANSAWNN, in her words, “this session is the most momentous in the meeting, it is a Call-to-Action”, she encouraged participants to tailor all their contributions, comments, questions and response towards the objective of the meeting.

LESSONS LEARNED
•The Nigerian Defense Headquarters stated that it was open for collaboration with other MDAs and CSOs on awareness creation on EW;
•There are short courses conducted by the Military which CSOs and other actors can take advantage of since they have a closer working relationship with the people;
•There are no existing policies on humanitarian interventions in Nigeria;
•The manufacture and use of IEDs in Nigeria is evolving, with the shift from the use of metal objects which were detectable to non-metal substances which are learnt on the internet;
•There is need for continuous sensitization and awareness creation on EW, especially to people in the rural areas who have no access to media reports or articles.